Today in Europe, 25% of total GHG emissions are linked to transport with 8% of the total emissions produced by buses. Therefore, transport systems like Electric Bus Systems are a way to reduce the emissions and improve quality of transport and living.

The Electric Bus System is a public transportation system that is operated by electric buses only. As every public transportation system, it can include ticketing, information of customers and a monitoring system.
Additionally, facilities to charge the electric buses are mandatory. Due to the charging process, a management system for operation and planning of range as well as route optimisation is even more important than it is with conventional bus systems. (see also SCIS)

In comparison to conventional engines, Electric Bus Systems are free of emissions locally. Moreover, less noise is produced when driving. While the initial costs for purchasing electric buses may be higher, the overall costs of Electric Bus Systems can be lower than the one of other systems depending on the usage.

The main goal of the Electric Bus System is to reduce the local air pollution within cities. Besides that, the solution achieves the benefits listed below. Whereas some benefits are likely to be fulfilled with a basic implementation of the solution, the fulfilment of the potential benefits depends on the functions implemented in a specific project.

Aside from bus systems that do not exclusively use electricity (hybrid systems), there are three main variants for Electric Bus Systems (powered by battery with night-charging, opportunity charging or buses with a fuel cell). Moreover, there can be further differentiation depending on the charging system (plug-in charging, docking), battery types (e.g., Lithium-Ion technology (LFP, NCM/NCA, Li-Titanate)), etc.

The battery of the bus is charged once a day – usually at night at charging stations in the depot. These buses are suitable for shorter daily distances (ca. 100-200km).

These buses have a smaller battery that is charged occasionally – mostly at the last stop of every route. They can be used on long daily distances (ca. 300km). Because of the charging process, they normally need longer at the last stop and require close substations. New technologies increase the efficiency of such charging processes, e.g.  fast charging or recovery of break energy (e.g., 1MW chargers with 400kW chargers already in place).

The bus produces the energy for the electric propulsion with its own fuel cell and hydrogen that is carried in a tank. The system suits long daily distances. A hydrogen infrastructure is needed at the depot.

A strong energy grid, which can be used for charging by the electric buses, simplifies the implementation of this solution. Besides this, it is recommended to invest in sustainable and local energy generation to reduce energy costs and increase the environmental benefit of the Electric Bus System. A local smart grid supports balancing loads. 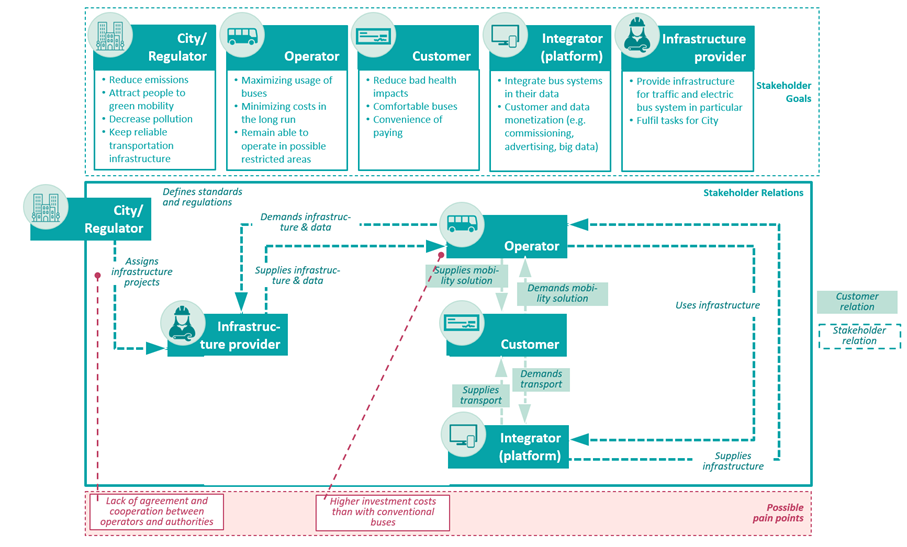 In 2019, there were about 3.000 electric buses in Europe and the United States, which only represents 1% of all buses. However, a rapid growth is predicted for the next years and is highly driven by legal regulations and government initiatives. Cities like Paris, Moscow or Berlin are planning to purchase hundreds of new electric buses in the upcoming years. 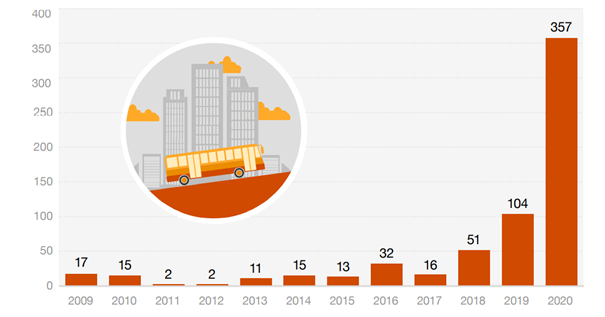 High investment costs of electric buses in comparison to conventional (diesel) busses can be balanced with lower operational costs and longer lifespans (e.g., image Proterra). Some operators produce their own regenerative energy for the buses. The profitability of e-buses will increase as soon as there are stricter emission regulations or even diesel bans in urban areas. Restrictions are expected to be introduced in various European cities within the next few years.

The graph shows the profitability of the operation of electric buses in comparison to other buses over a lifetime of ten years. The data is obtained out of manufacturer specifications from Proterra, who - as of March 2017 - is one of three e-bus manufacturers providing buses on large scale. According to this calculation, electric buses are cheaper despite higher investment costs since costs for fuel and maintenance are much lower compared to traditional buses. 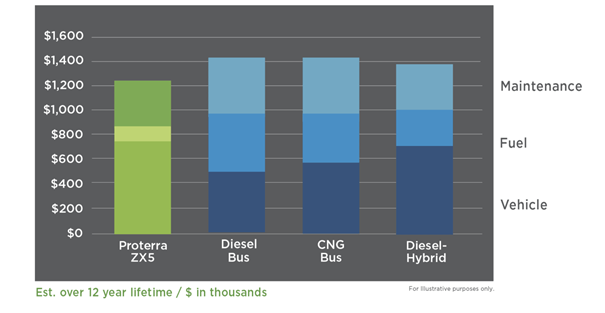 CNG powered buses in the city of Tartu

The City of Turku has introduced new electric buses in the public transport fleet to reach the goal of becoming CO2 neutral by 2029.

At least six new electric buses were introduced to Madrid’s existing bus fleet and being tested in real-life conditions in the city’s living lab. The main goal is to use a clean bus fleet in areas which lack high-quality public transport service.

Thanks to digitalisation and optimisation, a total of 14 accessible vehicles have been successfully operating between the Bonn, Darmstadt and Frankfurt sites. Since then, the company transport service has offered Telekom employees a flexible and sustainable alternative to a company car.

Autonomous shuttles and the use of solar energy on the streets of Lamia, Greece

This project was part of the Horizon2020 FABULOS project, where Auve Tech participated together with Mobile Civitatem Consortium. Despite the country's lockdown due to the COVID-19 pandemic, our autonomous, electric shuttles covered a total of 1,930km and served 399 end users.

Autonomous shuttle connecting the airport, the shopping centre and Ülemiste City in Tallinn

While the process of switching toward electric buses is heading in a very positive direction, new challenges and opportunities are becoming more evident. By using modelling data, Bio Power implemented a smart charging strategy for a local e-bus depot in Barcelona.