Global energy demand has risen sharply over the past decade. Economic growth, population growth and the industrialisation of developing countries are among the reasons for this. This energy demand should be covered as stably and sustainably as possible and with renewable energies (Proton OnSite, 2016). Variable electricity generation is a common phenomenon when dealing with renewable resources e.g. wind and sun. Thus, there can be a mismatch between the energy generated and the consumption patterns, leading to the fact that the energy is not necessarily produced at the time it is needed. Furthermore, due to the decentralised and widespread energy generation by renewable sources, the energy is not necessarily produced in places with demand. Storage capacities decouple energy production and consumption and thus can support to balance the system by storing energy that is currently available but not needed, for later use (Distributed Control Methods and Cyber Security Issues in Microgrids, 2020).

The main goal of Energy Storage Systems is to ease the usage of renewable energies. It saves energy and thereby balances out differences in generation and consumption time. Whereas some benefits are likely to be fulfilled with a basic implementation of the solution, the fulfillment of the potential benefits depends on the functions implemented in a specific project.

Ability to manage energy according to demand and production

Display of energy demand of the system powered

Against increased voltage and frequency fluctuations, and changing of power flow patterns

There are different possibilities to classify energy storage systems to create comparability. The best known are classifications according to physical, energetic, temporal, spatial and economic properties. The energetic classification distinguishes into the superordinate categories of power and energy, the temporal into short-term and long-term, the spatial into central, decentral, stationary and mobile, the economic into markets, capital costs and operating costs. Due to the popularity, the high number of categories and the technical understanding, the different storage systems are classified and explained physio-energetically. (Sterner, Stadtler, 2017)

Mechanical storage systems use the energy that a medium has due to its position (potential), velocity (kinematics) or thermodynamic state (pressure). They are mainly secondary energy carriers.

Since the use of energy from renewable sources is most economical when used in forms of electricity, electrical storage is an obvious option. The advantage of not having to convert electrical energy into other forms of energy and thus being able to avoid high conversion losses in some cases. This is offset by the disadvantage of extremely low energy densities in terms of both volume and weight - and exorbitantly high costs (Sterner, Stadtler, 2017). For this reason, their application is currently merely limited to niche applications. (Kurzweil, Dietlmeier, 2015)

Capacitors are used for decentralized short-circuit current supply and use for applications with highest demands on reaction times (e.g. voltage quality).

Electrochemical storage systems consist of electrodes that are chemically connected. Electrical energy is transferred through chemical reactions during loading and unloading. There are electrochemical systems that can only be discharged. These are called primary batteries. Systems that can be charged and discharged repeatedly are called secondary batteries (accumulators). Chemical storage, on the other hand, involves material energy sources such as hydrocarbons or energy-carrying substances. The energy can be stored in gaseous media (hydrogen, biogas), liquid media (fuels such as ethylene, methanol) or in solid media (biomass, coal). The charging processes occur in nature (photosynthesis) or are technically converted (power to gas, power to liquid). Discharge is realized through combustion processes or conversion of thermal into mechanical or electrical energy.

Function:
Chemical storage functions as long-term storage for the power sector, but also as a fuel supplier for mobility and heat. 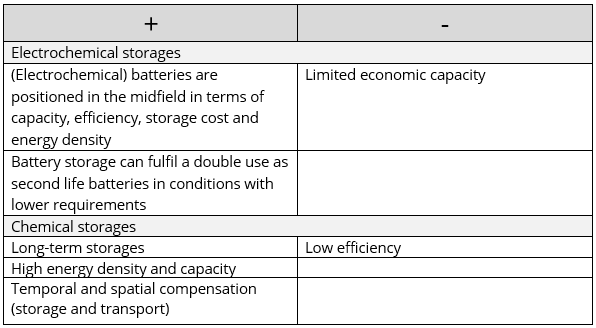 The storage solution molten salt, mentioned in the grid flexibility solution, falls under the category of sensitive heat storage.

The economic performance of many generation and storage technologies strongly depends on the regulatory framework, especially with regards to taxes and levies. Climate policy and CO2 price implications have the potential to clearly push low carbon emission technologies. Then, the allowance price is added to the variable costs of each fossil-based technologies. For example, many countries in Europe have a carbon tax. Portugal, Sweden, Spain and Poland are just a few examples (taxfoundation, 2020). There have been several EU initiatives on batteries, such as Batteries Europe, SET Plan action, BRIDGE projects on batteries or the BATSTORM project (European Commission, 2020). Most countries in the EU do not have a specific support mechanism for energy storage systems. However, some countries do. In Germany, for example, there is a subsidy program for distributing battery storage systems. It aims to ensure that solar PV systems have a greater benefit to the overall system by smoothing their export. While some energy storage solutions are commercially viable without subsidies, larger infrastructure-heavy projects, such as larger-scale pumped storage plants, currently struggle to attract investment due to the high revenue risk (cms, 2018). 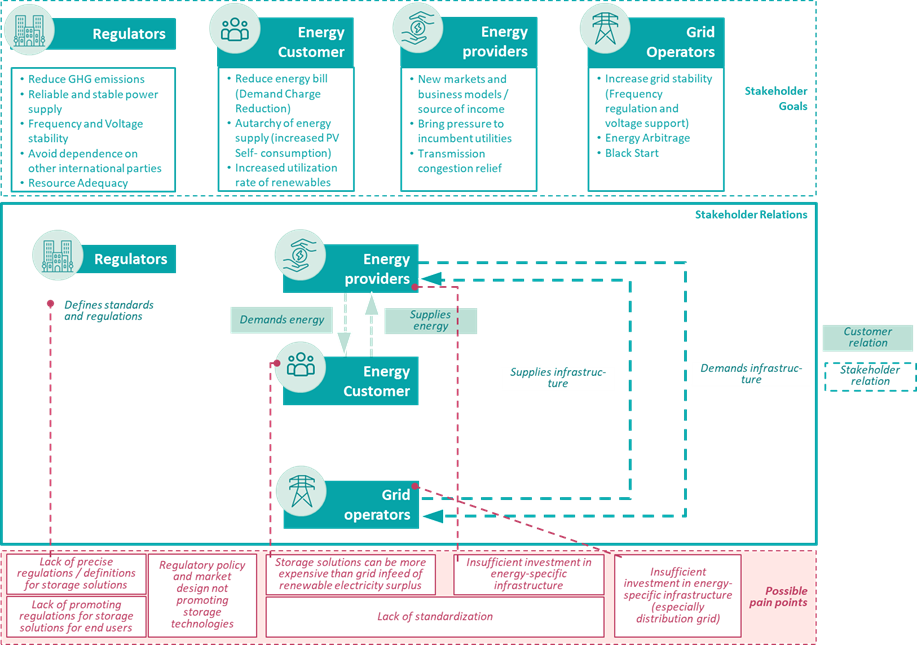 In 2019, the global demand for energy storage systems amounted to 194.32 GW (Region, And Segment Forecasts, 2020). According to Bloomberg NEF, the energy storage market will cumulatively grow to 943 GW or 2,857 GWh by 2040. From 2018 to 2040, $620 billion will be invested in energy storage. By 2040, energy storage is expected to grow to account for 7% of total global installed electricity capacity. Initially, much electricity storage will be installed behind the meter, but by the mid-2030s, the majority of storage is expected to be in the utility-scale sector. The development of the market in the individual countries can be seen in the following figure (BloomberggNEF, 2018).

The costs for storage capacities are crucial for an energy system based on significant shares of renewable energy. The figure below presents an overview with specific prices per kWh for various electricity storage technologies in recent years. This incorporates battery systems, power to X technologies (electrolysis in brown colour), and pumps storage plants (pumped hydro in yellow colour) as the currently most utilised solution. The dependency between price and cumulative installed capacity is shown on the horizontal axes. Thus, a correlation between the installed capacity and cost reductions can be observed.

In addition to the historic reduction of specific costs of electrical storage capacities, further cost reductions are expected. Studies project that Levelised Cost of Storages (LCoS) will reduce at least by one-third to one-half by 2030 and 2050. Moreover, it is expected that lithium ion likely to become most cost efficient for nearly all stationary battery applications from 2030 (ScienceDirect, 2019). The effect of cost reductions is not solely caused by economy of scale but also by the maturity-level of the technologies. A projection about the development of LCoS is given in the following figure. 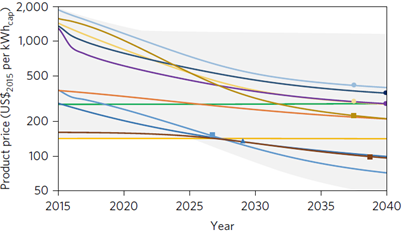 Citizens are involved in the definition of the actual needs and the most appropriate solutions for the energy community. They also participate in the design of the energy community as an entity (legal form, structure, organisation, rules of operation and governance), and management of decisions.