As a service for company employees on site, for large events or for hotel guests, can be connected to municipal systems

Electric bikes provide the opportunity for cities to reinvent their mobility model, tackling all these problems and promoting a healthy lifestyle.

The bike-sharing industry is steadily growing over the past years. IT-technologies and innovative business models ease the implementation of bike sharing systems. Roland Berger Strategy Consultants estimate the global market for bike-sharing to be worth between € 3.6 and € 5.3 billion by 2020. (BIKEeurope, 2015) The European bike-sharing market, in particular, is expected to grow at a compound annual growth rate of 9.4 % during 2015–2025, from 139,090 bikes in 2015 to more than 340,000 bikes by 2025. The number of users is expected to more than double by 2025. (Forst and Sullivan, 2016)

The expenses of a bike sharing system consist of relatively high investment costs for the fleet of bikes and rather low variable costs. Especially the station installation accounts for about 70% of fixed costs. Redistribution cost is an important variable cost component and accounts for almost 30% of operating costs. The following graphic gives an overview of the different emerging costs and a price range for each of these costs. (Forst and Sullivan, 2016) 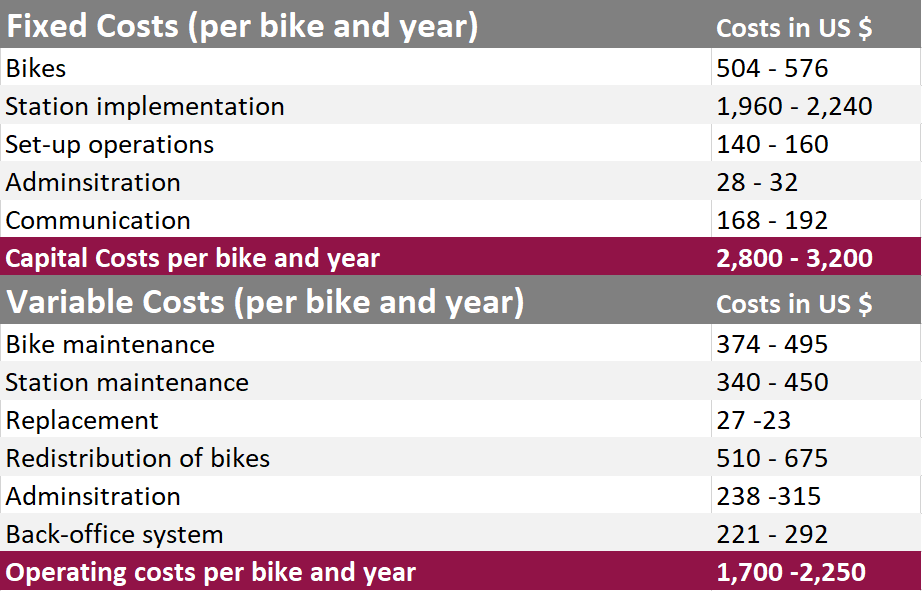 Government bodies often fund Bike-sharing systems in Europe. Over the next five years, cycling will be increasingly prioritised at the national and regional level. By 2020, close to $1,354.9 million is set to be invested in cycling programmes, cycling infrastructure, and the cycling industry. France as the biggest market for bike-sharing in Europe, for example, fund the industry with $219.6 million in the period 2014-2020. Besides public funding, public transport agencies, and advertisement companies, the European Commission also has a budget of $1.12 trillion for 2014 to 2020, of which only $669.4 million has been allocated to cycling. (Forst and Sullivan, 2016)

- Ireland, Ireland’s First National Cycle Policy Framework: aims to achieve a cycling modal share mark of 10% by 2020, up from 2% in 2006. This includes policies related to fiscal incentives, provision of bikes and other indirect tax benefits.

- Norway, Norway, National cycling strategy - Get on Bikes!: aims at achieving 8% cycling modal share in Norway by 2023, by focusing on funding, infrastructure, and communication.

The aim is to promote the sustainable alternatives for local deliveries using electric Assist cargo bikes. The Municipality offers the use of 4 bikes leased from a fleet of different bikes owned by Manchester Bike Hire to any organization in Manchester.

With the aim of encouraging the use of bicycles and make this a considerable alternative to cars, the city of Tartu has implemented a city wide bike sharing scheme as part of the SmartEnCity Project. The system consists of public city bikes, parking lots with safety locks and a management system.

16 bikes were operated by HopperPoint as a service for visitors, workers and inhabitants in Strijp-S.

A mixture of ebikes and normal bikes is offered in a station bound bike sharing system located at one of the entrances of Strijp S.

The Mobility stations in Mülheim provide commuters and residents of the busy district with a location, where they can easily find various alternative transport options. The aim is to encourage behavioral change from using cars towards more active modes of transport like walking and cycling.

A pilot bike sharing system (BSS), with 300 bicycles and 37 stations, has implemented in Turku. This measure will provide the first BSS in Turku.

The reduction of the individual car use and the availability of multimodal mobility for everybody is a challenge for the future. The focus of this Use Case is on the development of a carrier e-bike for mobility-impaired people.